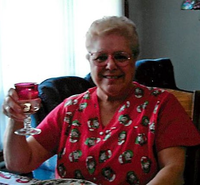 Born in Netcong, she was a lifelong resident.

Prior to her retirement, Angie was a Union Representative with Dover Handbag in Netcong.

A parishioner of St. Michael's RC Church in Netcong, she was a member of the Netcong Seniors Citizens. She enjoyed casino trips and traveling the country.

Relatives and friends are respectfully invited to attend Angie's Life Celebration on Monday October 28 from 4:00PM to 8:00PM at the Leber-Lakeside Funeral Home, 150 Landing Road, Landing.

A Funeral Mass will be offered on Tuesday October 29 at 10:00AM at St. Michael's RC Church, Netcong.

Angie will be laid to rest following mass with her late husband John in the Stanhope Union Cemetery, Mt. Olive Township.

In lieu of flowers memorial donations in her memory may be made to the Netcong-Stanhope Seniors, 23 Maple Avenue, Netcong, NJ 07857.