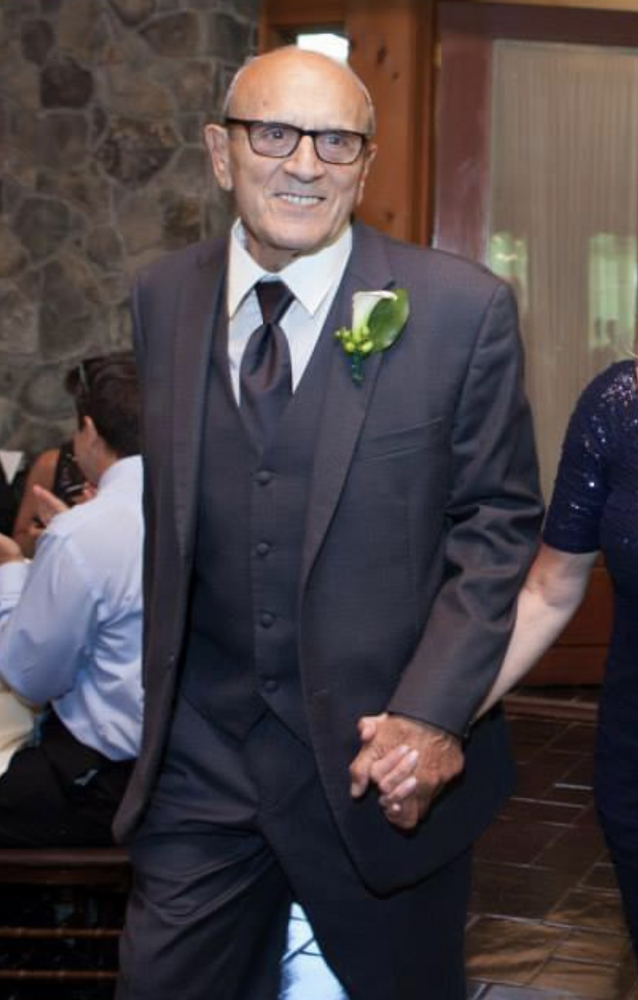 James Richard Fiorello, born in Dover, NJ on February 14, 1940, son of James and Mary Ann (Barbato) Fiorello passed away Monday, December 6, 2021 from an unknown illness. Jim spent his final day the way that he would have preferred it, and the way he loved to spend his Sundays, with his wife, kids, grandchildren, and dog surrounding him, Italian food in the kitchen, and football on the TV.

Jim grew up in Netcong, and in true Netcong tradition, he was assigned the nickname "Jas", a nickname that would last throughout his life. He lived a joyful childhood, playing on the train tracks with his neighborhood friends, and eating tomato sandwiches on his mother's home baked bread with his siblings. He played football for Netcong High School, and later traveled across the country with one suitcase, playing football for San Francisco State University. He later received his Master's Degree from East Stroudsburg University.

After graduating from college, Jim returned to New Jersey and started his career in education, teaching 6th grade in Roxbury Township. However, football was a fundamental part of his identity, and he eventually made his way back to the football field working his way from a volunteer coach up to Head Coach of the Roxbury High School Football Team, while also serving as a physical education teacher. Jim's coaching career was decorated with 100 career wins, multiple conference championships, and enshrinement into the New Jersey Football Coaches Association Hall of Fame (inducted the same day as Vince Lombardi), the inaugural class of the Roxbury High School Athletic Hall of Fame, and the New Jersey Scholastic Coaches Association Hall of Fame. Following his most recent Hall of Fame induction, Jim received a proclamation from New Jersey State Senators recognizing his accomplishments and contributions to youth and the sport that he loved.

As a coach, he was both inspirational and relentless, demanding and accepting nothing but the best from his players, pushing them to their limits and often showing them that they were capable of more than they knew. In the football community, he was known for being tough and intense, never backing down, a leader and role model for players and coaches alike. In the outpouring of love and support that the family has already received, it's been notable how many people have described him as a father figure.

In addition to his love of football and athletics, Jim was proud of his Italian heritage and was an incredible cook. He visited the grocery store almost daily and was most often found in the kitchen, preparing beautiful meals for his family and friends. Food was his love language and nothing gave him more joy than to be seated around the dining room table with his family, their plates overflowing with his meatballs, chicken parmesan, and pasta. Jim was a family man through and through, and his children and grandchildren were his greatest pride and joy.

Jim was preceded in death by his parents, and his in-laws Elizabeth and Joseph Fisher. He will be deeply missed by his beloved wife and the love of his life, Margaret (Peggy) with whom he spent 41 years, his devoted children and their families: Jimmy Fiorello and wife Julie Fiorello and their son Jack; Jamie Fiorello-Huhn and husband Jason Huhn and their children Amelia, Joey, and Alexander; Maria LaRusso and husband Cesar Abadia and their daughters Malena and Laila; and Jacqueline Fiorello and her daughters Marin and Justine. He is also survived by his brothers, Richard Fiorello and wife Lyn, Robert Fiorello and wife Mary, and his baby sister Jerryann Fiorello, two aunts Joanie and Jo, and many nieces, nephews, and cousins. His cherished friends will miss him greatly, including gatherings at The Netcong Sports Club poker nights and daily meetups of "The Breakfast Club". He also leaves behind many former players who still fondly refer to him as "Coach."

For family and friends who loved and appreciated Jim [Coach Fiorello], he will always be remembered for his warmth and kindness, wisdom and guidance, integrity and generosity, and of course, his sense of humor. His legacy lives on in the hearts of his family and friends, and the Roxbury Football community.

A memorial visitation will be held on Sunday, December 12th from 3:00-6:00 PM at Leber-Lakeside Funeral Home, 150 Landing Road, Landing, NJ 07850. A Celebration of Life will also be held at a later date. If you have pictures, stories, or words that could be shared at the celebration please email them to jamiefiorello@gmail.com.

Share Your Memory of
James
Upload Your Memory View All Memories
Be the first to upload a memory!
Share A Memory
Send Flowers
Plant a Tree