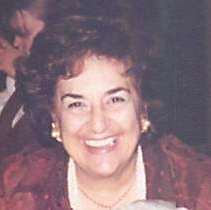 Born in Jersey City on August 8, 1927 to the late Frank and the late Carmela (Corbisiere) Battaglino, she lived in North Bergen before moving to Toms River in 1986.

A homemaker, Clotilda was a Rosary Society member. She enjoyed sewing, knitting, crocheting and bowling.

Beloved wife of the late Joseph Facciola. Devoted mother of Sandra Mancuso and her husband John and the late Stephen Facciola. Cherished grandmother of Frank and Andrea Mancuso, Nicholas and Noelle Mancuso and Gabrielle Mancuso. Loving great grandmother of Vincent, Alaina, Julia and Logan Mancuso. Dear sister of Carolina Matrisciano. Dear aunt of Michele and Frank Matrisciano and other nieces and nephews.

Relatives and friends are respectfully invited to attend Clotilda’s Life Celebration on Tuesday May 3 from 4:00PM to 8:00PM in the funeral home.

A Funeral Mass will be offered on Wednesday May 4 at 10:00AM at Our Lady Star of the Sea, Lake Hopatcong.
Following mass, Clotilda will be laid to rest with her husband Joseph in the George Washington Memorial Park, Paramus.

Memorial donations in her memory may be made to the Alzheimer’s Association (www.alz.org).

Share Your Memory of
Clotilda
Upload Your Memory View All Memories
Be the first to upload a memory!
Share A Memory
Send Flowers
Plant a Tree