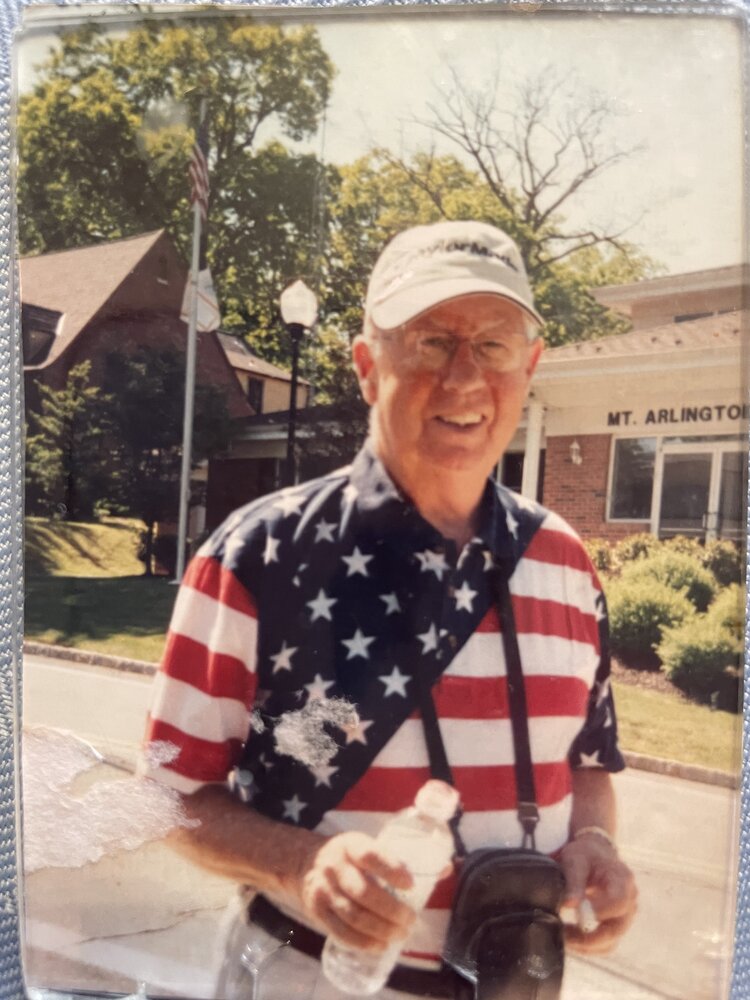 A great light has left the universe, our father is gone. Peter G. Keefe passed away Thursday April 7, 2022, at Dover General Hospice Care.  He was predeceased by his wife of 65 years Barbara H. Keefe who passed in 2019.   Everyone who knew him, knew he loved planes, cars, boats, movies, musicals, plays and music.  If you went to his house, he would blow your hair back with his stereo surround sound of either Top Gun or Andre Rhieu.  With his love with movies, he took everyone he knew to see Jaws, ET, and Star Wars. He and Mom went to Broadway at least once, if not twice a year.  He loved the bargain of the two-fer and an afternoon matinee.  Of course, he would not spring for a taxi and made our mom walk 20+ blocks all over the city.   The Buffalo Bills never had a more loyal fan.  He told stories of freezing at Rich Stadium in three feet of snow.  Football, tennis, golf or car racing, he would watch endlessly.  He would drive all over hither and yon to watch his grandkids play hockey, lacrosse, or swim or lead a band.

He grew up dirt poor in the suburbs of Buffalo, New York. Raised by a single mom, he and his sister went to catholic school. He played basketball and swam in high school.  He made great friends many of whom he still spoke to weekly, may we all cherish the gift that lifetime friendship brings.   Alas, he was too short to play college basketball at Canisius but it did not stop him from cheering them on the sidelines.   He served in the Army, going to Korea.  He came home with stories of dodging the “rules.”   He married our mom and they set to making a life with their children in Binghamton, NY.  He taught his children the value of fixing something yourself, working on cars in the driveway or taking a washing machine apart.  They faced many challenges, overcame them and he moved his family to New Jersey in 1974 in search of more success. As a salesman in the 80’s this was not always easy.  Quirk Moving and Storage, Levolor, Corian, you name it, he could sell it.   He worked part time at Macy’s furniture in Wayne for many years and retired in 2004. His greatest thrill was being in the Macy’s Thanksgiving Day parade which he did for 15 years. He even got his daughter and granddaughter to join him in the parade route.  He always said the best part was waving to the kids and hearing them cheer.  He met many celebrities and introduced himself just as he was.   He went on to be a starter at Flanders Valley Golf Course and enjoyed the perks of two free rounds of golf each week during the season.  He retired again at 80 years old but still played golf weekly with the friends he met there.

He was beloved by everyone.  He made friends wherever he went.  He could strike up a conversation with a rock and get the rock to buy him a gin and tonic.  For someone who grew up without a father, he became a great one and an even greater grandfather.

Relatives and friends are respectfully invited to attend Peter’s Life celebration on Monday April 11, from 4:00 to 8:00pm at Leber Lakeside Funeral Home.

A Funeral Mass will be offered at 10:30 am at Our Lady of the Lake RC Church 8 Windemere Avenue, Mt Arlington. All are invited to meet directly at the church.

In lieu of flowers, donations may be made to Peter's granddaughter's GoFundMe Page:

Share Your Memory of
Peter
Upload Your Memory View All Memories
Be the first to upload a memory!
Share A Memory
Send Flowers
Plant a Tree